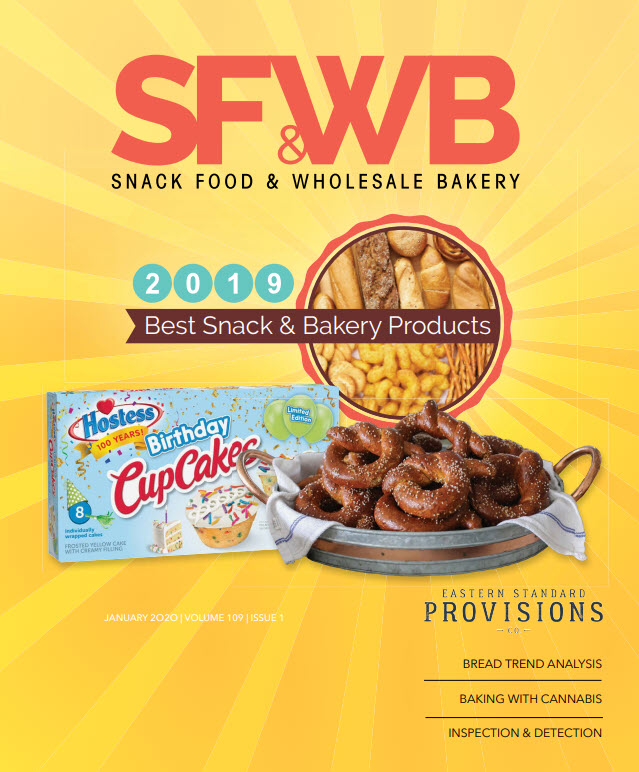 Russ Cersosimo was quoted in the January 2020 issue of Snack Food & Wholesale Bakery magazine in the article Baking with Cannabis on pages 28 and 29.

Understanding ingredients dynamics is essential before entering the market for cannabis-infused foods.

At the end of the day, though, all of these plants are cannabis, with key points of differentiation based on their constituent canna- binoid contents.

Now that CBD has captured the national spotlight as one
of the hottest ingredients in recent memory, plant breeders are actively working to develop plant varieties with targeted cannabinoid levels that will

prove attractive to the quickly expanding market for foods infused with hemp and/or cannabis ingredients.

FDA has completed generally recognized as safe (GRAS) notices for ingredients derived from hemp seed: hulled hemp seed, hemp seed protein powder, and hemp seed
oil. FDA has no objection to use of these ingredients in food products.

However, FDA has not yet ap- proved CBD or other ingredients derived from hemp or cannabis flower for federal use. Regula- tions vary from state to state, so check with your local regulatory authorities to definitively ascer- tain current market potential for

their use in foods like snacks and baked goods. And while FDA has taken a soft position of non-en- forcement regarding use of CBD in food products, the agency has shown that it will actively pursue companies that make health-re- lated claims on product packag- ing and in marketing materials. Also, transport and/or distribu- tion of foods containing CBD or other ingredients derived from hemp or cannabis flower is cur- rently forbidden based on existing Federal Trade Commission (FTC) consumer protections.

“Bakery goods are excellent candidates for inclusion of can- nabis derived/based ingredients,” says R. Scott Riefler, chief science officer, SoRSE Technology, Seattle, and a member of IFT’s Legal Cannabis and Hemp Edibles sub- group. “With properly prepared hemp/cannabis ingredient forms, cannabinoids can be added to wide range of baked goods without interrupting the sensory aspects for the baked good.” He notes that the market potential encompasses everything from dessert to pre- or post-workout nutrition bars.

Ingredients derived from hemp flowers include extracts, distillates, broad spectrum powder, and isolates, says Black. “Terpene levels dictate flavor and taste. Hemp extracts and distillates contain higher concentrations of terpenes than isolate and broad spectrum powder. Typically, distillates and highly concentrated oils need to be heated to high temperatures to liquefy, as they are highly viscous oils reminiscent of crystallized honey or beeswax. This additional heating to ensure even distribution of the ingredients adds complexity to the mixing process, and the thick, oily nature of the extracts and distillate adds variability to the final baked product. Alternatively, we think the best ingredient for these purposes is broad spectrum powder, because it has the least flavor impact,
and least effect on a recipe because no additional heating is required. It is the easiest cannabinoid ingredient to measure, mix, and dose accurately.”

Broad-spectrum hemp distillate is where the industry is headed, suggests Russ Cersosimo, co-founder, Hemp Synergistics, Pittsburgh. “Broad-spectrum distillated product means that the THC is completely removed, yet all of the other beneficial cannabinoids remain intact and active.” This enables an “entourage effect” benefit, which is the synergistic effect provided by the entire host of cannabinoids.

“Currently, the most ‘inter-state friendly’ type of cannabis extract to use for a homog- enized, uniform, non-THC baked good is
either a distillate or isolate form of the specific cannabinoid desired for product inclusion,” says Matthew Anderson, co-founder and CEO, Van- guard Scientific Systems, Inc., Portland, OR.

“In adult-use markets where THC, CBD and other minor cannabinoids are capable of being included in the final baked good, the usage of butter to incorporate the range of plant-based ingredients have shown notable performance difference to other forms of extract,” says Anderson. “By entering the bloodstream through the gut, butter-extracted

cannabinoids have a slightly longer onset time, but a noticeably longer effective period.” Most cannabinoids, including CBD and THC,

have relatively low vaporization temperatures and will flash off at temperatures exceeding 300 ̊F, says Riefler. “For most baked goods with residual moisture, such as breads, brownies, cakes, cookies, etc., this is not an issue, as inter- nal temperatures remain below 200 ̊F.”

THC, CBD and other cannabinoids are present in the cannabis plant in their acid form and are not bio-active, notes Riefler. “They must first be converted to their non-ac- id forms. This process is referred to as ‘decar- boxylation’ (removal of the carboxylic acid group). This is done though a gentle heating process. For extracts, this typically, although not always, takes place during extraction and refinement steps. When working with ground plant matter, this can be done prior to inclu- sion in the baked product.” Interior tempera- tures achieved during baking are often not hot enough to drive complete decarboxylation.

A key consideration is product differentia- tion and understanding the needs and desires of your target demographic. There are many hemp products already on the market that target health-and-wellness consumers who may not be interested in cannabis or hemp components like THC or CBD, says Andrew Wong, President, Axiomm Technologies, Calgary, Alberta. “If the goal is to create a functional food product that will deliver one or more active ingredients, such as CBD or THC, then you should do your diligence on the dosing, stability and degradation of the active ingredient in your input.”

Cannabis ingredients bring sensory and bio-absorption considerations to the table. “Most cannabinoids are extremely bitter in nature, with very negative sensory,” says Rief- ler. “Additionally, oils have variable uptake into the body and as such experiences can vary greatly in terms of engagement and dura- tion.” Working with a trusted ingredient sup- plier can effectively manage these variables.

A QUESTION OF SAFETY

“Cannabis sativa is a bio-accumulator, which means that it takes up everything from its environment, including heavy metals, fertiliz- ers, and pesticides,” says Cersosimo.

“There has been much attention given to lim- iting the use of solvents, fertilizers, and other

cultivation or processing aids when growing and extracting CBD from cannabis and, to a lesser extent, hemp,” says Wong. “In regulated markets, the governmental authority respon- sible for administering the rules on cannabis is often very strict in monitoring the presence and quantity of potential contaminants.”

When sourcing CBD-containing ingredi- ents, it’s vital to obtain thorough certificates of analysis (COAs) for the material from vetted third-party laboratories, says Black. “These COAs should include residual solvent testing, as most extracts, distillates, and isolates are produced using solvent-based methods. These should also include heavy metal and pesticide testing.”

A major consideration is uniform distribution of the hemp/cannabis extract throughout the baked good, says Riefler. “To insure uniformity and homogeneity, meaning each bite has the expected content, it is often preferred to intro- duce the cannabinoid in a water-soluble form, either a liquid emulsion or an easily rehydrated powder form. In the case of a water-soluble emulsion, it can be added to the water portion of the mix, or if dry blending is preferred for low-water systems, then a rehydrating powder is preferred. Once in the baked product, canna- binoids are very stable and provide useful shelf lives, often exceeding a year duration.”

Understanding the molecular thresholds of the various cannabinoid ingredients used in products like baked good is paramount, says Anderson. “Depending on the type of extract or isolate chosen, as well as the specific cannabi- noid targeted, process steps including purifica- tion, homogenization, heating, and storage are all critical for product performance and shelf stability. Anecdotally, we have firsthand expe- rience of stable ingredient creation and storage without degradation over an 18-month period.”

Due to federal legal restraints, little has been scientifically proven to date regarding the benefits of cannabis ingredients, says Black. “Numerous papers exist showing potential benefits, but almost none of these findings have been replicated/studied in humans.”

Until FDA creates a pathway for using canna- bis ingredients in foods, manufacturers need to tread lightly. Cersosimo advises that it’s crucial for food manufacturers to understand that the FDA has taken enforcement action on compa- nies that have made medical claims. SF&WB 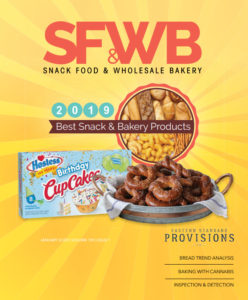